We're Back and accepting new students! Please click here to see the latest updates from ADM regarding our new normal in this Covid time.

How to overcome the “I can’t” feeling

We have all been there, the moments when we just want to give up because we feel like we just can’t “do it”. I know that I feel it when I am trying to do a hard workout and I see it in my students when I am asking them to complete a new challenging work. Here at ADM we call that feeling “assumed inadequacy” and it is one of the four behaviors talked about in Positive Discipline courses.

I have learned that the way to counteract that feeling is by finding ways to show my students that they can indeed “do it” by breaking down the task at hand into smaller more manageable parts. A great example of this concept is demonstrated by one of my students.

This particular student would get out the hundred board time after time but would always end up putting it away in tears because she was so frustrated in herself and in not being  able to complete the work. I have worked with her numerous times trying to complete the work but as soon as I would step away she would loose her confidence.

Than I had an idea, I thought of a way to not only break down the work into smaller parts but also to show her she was capable of completing the work on her own. We separate the numbers by decade and than took them one decade at a time and put them on the board in order. This allowed her to take this extremely lengthy and challenging work in smaller bites that she was capable of handling. 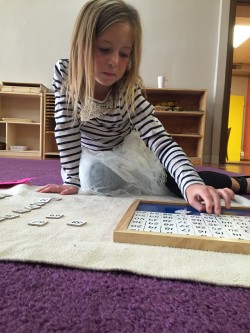 Once she was done you can see it in her face how she felt. When I asked her she told me “I am so proud of myself! I CAN do it!” 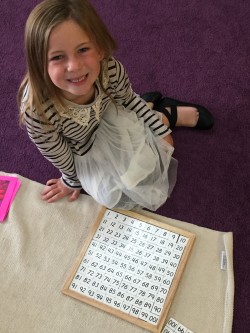 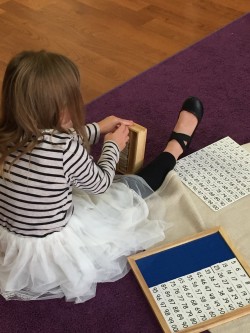